Part 1: How Bees Inspire Art Activism with Matt Willey of The Good of the Hive 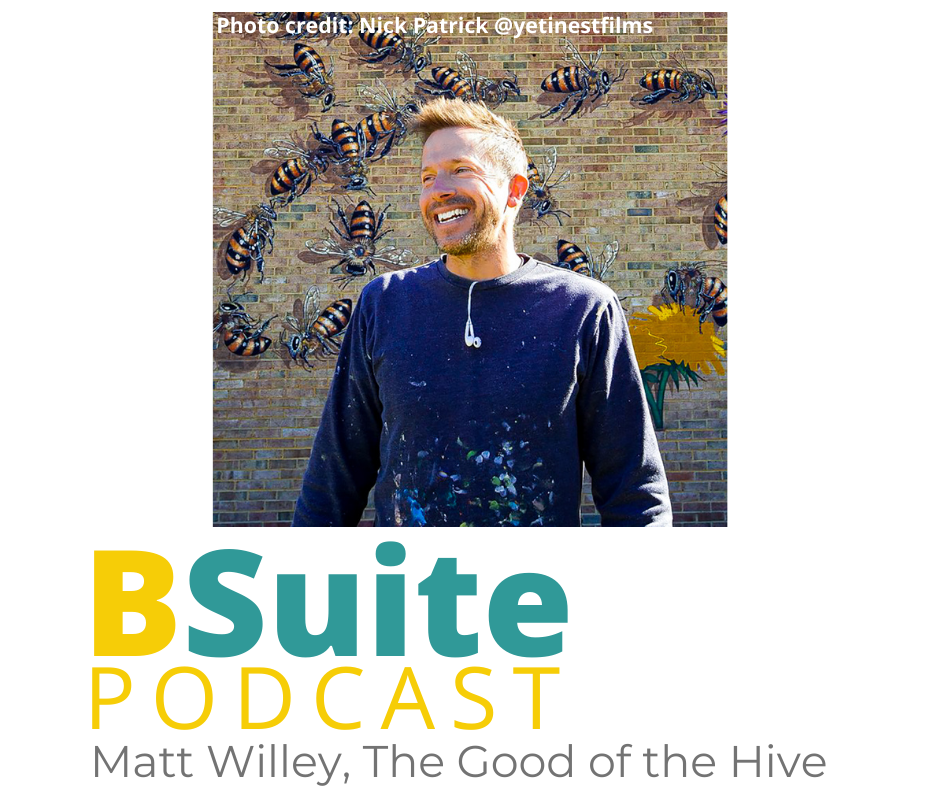 In Part 1 of this two-part episode, I’m fortunate to speak with Matt Willey, art activist and founder of The Good of the Hive, a socially driven business that’s designed to ignite radical curiosity around planetary health issues through art and storytelling.

Matt’s goal is to paint 50,000 bees on murals throughout the world to raise awareness of the importance of pollinators to our environment.

I caught up with Matt the morning after the 2020 Presidential Election (which also happened to be his birthday) in the midst of his latest mural project at the Hands On! Children’s Museum in Hendersonville, North Carolina.

How an unexpected encounter with a honey bee changed the trajectory of Matt’s life.

Matt’s story of how he got involved in the pollinator world is a unique one. It was back in 2008 and he was a commission-based muralist living and working in Manhattan. A tiny honey bee flew into his apartment one day and landed on the rug in the middle of the room.

Rather than allowing fear to take over, Matt looked at the bee through a lens of intense curiosity, getting down on the floor next to it and keeping it company over the next few hours. That’s when he realized how fascinating bees are.

A voice said to him, “This is about change.” At the time, he didn’t know what it meant, or that it would later inform his career. After the bee incident, he began researching bees online and learned of their declining population and uncertain potential for survival. 7 years later, he created his first bee mural.

The hidden meaning behind Matt’s art is connection.

Each mural that Matt paints is different, from the swarm of bees he painted on an elementary school building, to a recent mural he created for the children’s museum in North Carolina. He has begun to include butterflies into the art, because he deeply cares about all of the pollinators.

There’s a message of activism behind his work. He wants observers to pause and ask themselves, “What am I looking at right now?” He wants to inspire change and encourage adventure and curiosity.

Matt says that all great art has questions. There’s no curiosity in answers. A swarm of bees painted into a wave shape is like a juxtaposition. It’s a puzzle to solve.

There’s a gift in choosing presence over perfectionism.

As a self-proclaimed perfectionist, Matt admits to how he used to romanticize the hustle, putting 150% into everything. That extra 50% was taking away from his life.

He recalls a moment where he was painting a mural at a school, struggling to focus on his work because of the relentless energy of the young kids shouting and playing around him.

When one little girl started talking to him about the mural, he realized he had two choices: either he could accept the radical curiosity and excitement emanating from this little girl or keep painting and not give her his undivided attention. You might be able to guess what he chose!

Ever since then, Matt opts to be present over being perfect and has found so many new connections through those conversations. Connection and community engagement wins every time!

“The bee to her hive is a symbol of us to our community. Us to our planet.”

Listen to our Podcast!

On the BSuite, we explore topics like what it means to be purpose-driven and becoming a B Corporation. Episodes available on all major podcast platforms.