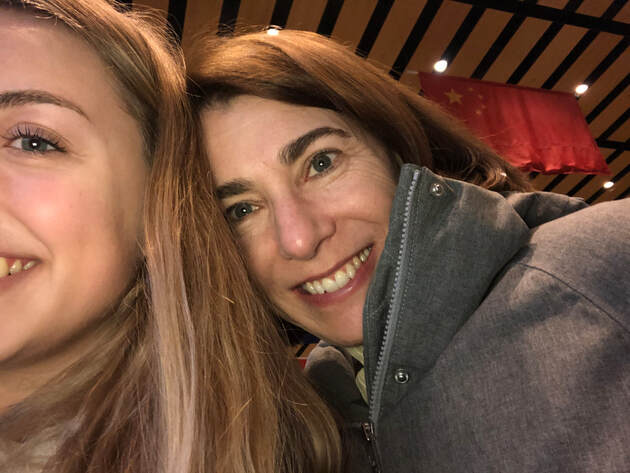 Weeks spent in quarantine force on us a slower pace compared to those rushed days of the recent past. I feel like I’ve been swimming in molasses with waves of sadness, fear, worry and occasional absurdity rolling over me depending on the day. Time is a mess. There’s too much screen time, not enough time to sleep and plenty of time to think. We’re all trying to cope, but the big takeaway is that even the best conference technology is no substitute for real human connection. It doesn’t take long for isolation to take its toll.

I’ve been sharing the house with my college-aged daughter for over a month. She’d been abroad for her junior semester in Europe until COVID-19 arrived and the trip fell apart. I received one of those dreaded middle of the night calls back on March 11 in which she described men wearing hazmat suits jumping out of vans and entering the dorm buildings on her university campus. I scrambled out of bed and onto my laptop to find her a ticket back to Boston. The heaviness of the pending crisis wouldn’t fully hit me until later on. In that precise moment, all I could think about was getting her home safely.

We’ll never know whether she contracted the virus over in Athens or on the flight home, but she tested positive about a week following her return. Before picking her up at the airport, my husband and I decided I would be the one to isolate at home with her, assuming she was a carrier. He made plans to move to a friends’ in-law apartment until the coast was clear. It goes without saying that I’d willingly walk into fire for either of my children but arriving at Logan that night to pick her up I felt an unfamiliar tension in the air. Was that fear? We’d only begun to hear about viral hot spots, PPE’s, and a lack of ventilators or testing. It would still be a few more days before the term, “social distancing” became a household word. We knew something sinister was happening, but for most of us it was still a faraway threat. In hindsight, I realize how ill-prepared we were for what lay ahead.

Thankfully, my daughter has recovered fully. Both of us have been incredibly lucky, and by that I mean my daughter did not require hospitalization and I skirted through with very minor symptoms. Low fever, deep, dry cough, loss of taste and smell and sporadic headaches were our primary complaints. During the course of her illness, we relied on daily calls from a wonderful public health nurse to fill the information void and keep us calm. As a survivor, my daughter has made plans to donate plasma through the Red Cross. Those are things to be grateful for. Yesterday, she developed a sharp pain in her lungs and shortness of breath while taking a walk around the neighborhood. Keep in mind, she’s just twenty years old.

While I’ve managed to keep up my ‘early riser’ routine most days, in contrast, my daughter has become a marathon sleeper. She’s never been a morning person, but there’s something else at the root of her extreme fatigue. I know that exhaustion can be associated with the virus, but I’m painfully aware that sleep can also mask other things like sadness. I know she’s deeply disappointed about losing her chance to study abroad, being separated from her friends and understandably confused and uncertain about whether she will be going back to college for her senior year in the fall. With so much of her life in limbo, she sleeps – a lot. Sometimes I’ll poke my head into her bedroom just to be sure she’s still breathing the way I used to do when she and her brother were babies. I fear the physical and emotional effects of this disease will stay with us for a very long time.

Recently I watched a video by Stanford University professor, Dr. James Doty called “The Compassion Revolution.” Dr. Doty talked about “psychological safety” which he defines as “being able to show one’s true self without fear of negative consequences of self-image, status or career.” Here in forced isolation, without our usual support systems, my daughter and I have built our own safety zone. I think our homemade version has served us pretty well. She’s managing her stress the best she can, but she knows I’m always here if she needs to talk, cry, laugh or just share a hug. Our house is a no judgment zone which helps both of us counteract the daily onslaught of emotions brought on by the pandemic. We’re leaning on each other during this difficult time and I feel closer to her than ever before.

My weekday calendar is still peppered with virtual meetings and phone calls. I’m so grateful to my agency team, especially to my marketing operations manager, Brenda, who continues to be an incredible ally throughout this crisis. By necessity, she and I have created our own psychological safety zone while at work. In a business context, this looks a little different than it does at home but the tenets are similar. We decided early on that we were okay with stepping over the professional boundaries that usually go with a boss-employee relationship. Loosening the straps around our defined roles requires mutual trust. If I seem preoccupied on a particular day because I’m worried about my family, or I didn’t sleep well, Brenda will suggest that I step away from my desk and take a walk. I’m able to follow her advice knowing she’ll take the wheel for a little while so I can let go. Likewise, I’ve made a conscious effort to relinquish control over certain projects to demonstrate how confident I am in her abilities. We set aside time every day to check in on personal stuff so that we are aware of what’s going on and can shift priorities, as needed. While I’m looking forward to the day when we eventually return to the office (assuming that happens at some point) I expect we’ll keep some version of our safety zone intact.

One day bookshelves will be full of volumes chronicling lessons learned from this world-wide disaster. In the meantime, let’s remember our collective responsibility to watch over one another – both at work and at home. Let’s extend a hand beyond our own family or corporate identity to safeguard others. Protecting and preserving the health of our communities means building trust and constructing larger psychological safety zones where we can live freely, acknowledging and accepting our responsibility to others, grieving what has been lost to us, and celebrating what is left intact.

We’re being offered an opportunity not to return to business as usual, and I, for one, plan to accept.