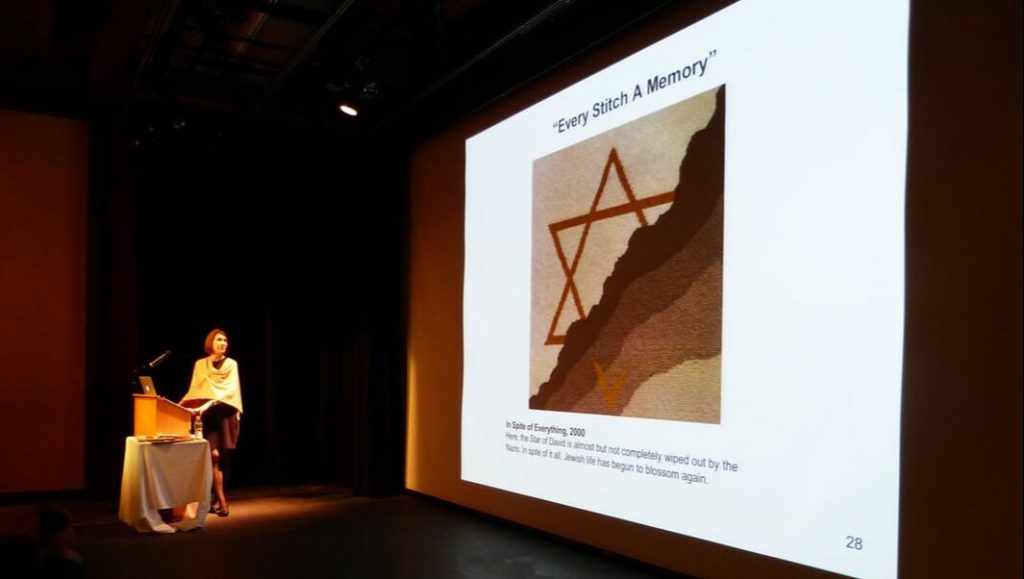 For the past fifteen years, I have been a Legacy Partner to a Holocaust survivor, which means I am a “Guardian of the Holocaust.” I am committed to this lifelong pursuit to ensure that the world remembers the survivors and victims of the Holocaust.

My Legacy Partner work has brought me before diverse audiences. I’ve spoken to gatherings of all ages and denominations, nationalities and life experiences, from primary school students to religious congregations, community organizations, book groups, libraries, corporations, and university classrooms.

In April of last year I presented at a local theatre in honor of Holocaust Remembrance Week. I’ll be back there tomorrow evening for another appearance, this time combined with an interactive audience ‘talk back.’ No experience is ever the same, and I always come away learning something new from my generous hosts.

The subject of my Legacy Partner story is Netty Vanderpol, a native of Amsterdam, Holland, who was imprisoned at Theresienstadt in Czechoslovakia between 1943 – 1945. While at Terezin, Netty was forced to endure terrible hardships and witnessed horrible abuses of her fellow prisoners at the hands of the Nazi guards.

Despite these traumas, she and her family managed to survive the war intact, returning to Amsterdam in 1945 to rebuild their lives, eventually immigrating to America a few years later. She and her late husband, Ries Vanderpol, also a Holocaust survivor, settled in the Boston area where they raised two children and worked closely with organizations like Facing History and Ourselves, the United States Memorial Holocaust Museum, and the Holocaust Museum Boston North, which is housed today at Salem State University’s Department of Holocaust and Genocide Studies.

There are so many reasons why it’s important to tell these survivor stories. The New York Times published an article that found that younger generations, specifically millennials, know less and less about world history and lack “basic knowledge about what happened” during the Holocaust. While it’s easy to assume everyone within a particular age group shares similar characteristics, I would caution against making such broad generalizations. I’m sure there are plenty of people of all ages who haven’t been properly exposed or who have simply chosen not to pay attention to the lessons of history.

At a social justice symposium at Merrimack College in 2018, I met an undergraduate student who told me he attended my presentation so that he could learn how to be more tolerant in his future career in law enforcement. Another young man I met through business heard about my Legacy Partner work and wanted to talk with me about his visit to Dachau in Southern Germany. When I spoke to a Jewish congregation in Lawrence, Massachusetts, a few years back, I was overwhelmed by the personal family stories I heard from members, young and old. These experiences give me hope that we will eventually stem the tide of ignorance and build greater awareness across generations.

The inevitable mortality of the survivors, many of whom are in their late 80’s and 90’s, makes this work all the more important. In the words of the late Holocaust survivor and Legacy Partner Program founder Sonia Weitz, “The goals of The Holocaust Center are to document and to preserve history; to reduce hatred, prejudice, ignorance and indifference through education; and to prevent future tragedies through the study of the universal lessons of this period.”

The Legacy Partner Program, currently housed at Salem State University, mirrors the wider lens of the United States Holocaust Memorial Museum, which has amassed its own extensive archive of survivor stories for educational purposes, lest we ever forget.

Sharing Netty’s story is my way of fulfilling Sonia’s promise. It’s my honor to educate others about the Holocaust by commemorating Netty’s life, so that all that she endured may never happen again.

If you would like me to share Netty’s story with your congregations, group, or organization, please get in touch.

Listen to our Podcast!

On the BSuite, we explore topics like what it means to be purpose-driven and becoming a B Corporation. Episodes available on all major podcast platforms.