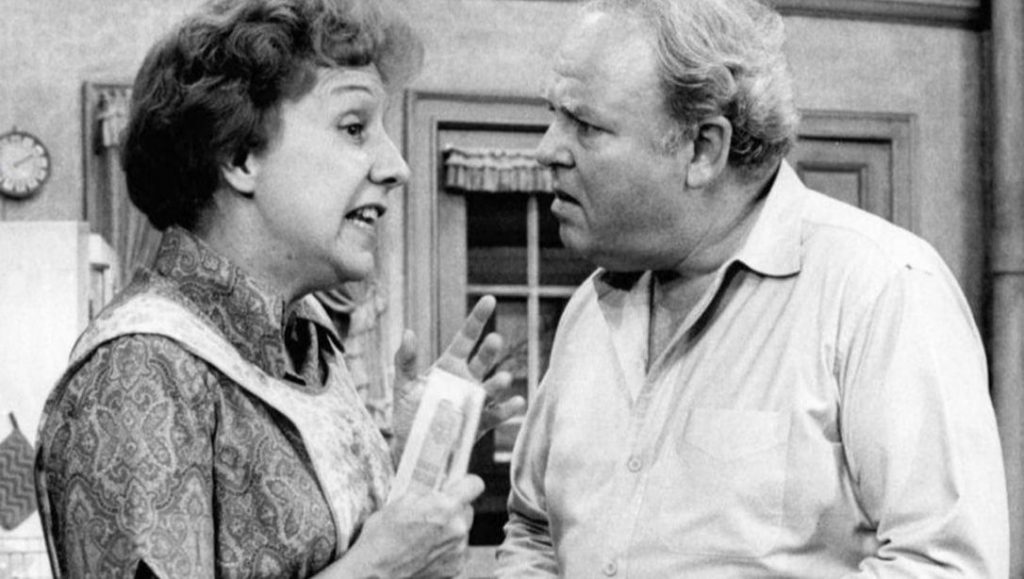 When I was a little girl, the TV show, All In The Family was a staple at our house. Its broadcast between 1971 – 1979 marked my formative years. Even very early on, I could sense danger in Archie Bunker’s blustering lack of decency within his family and among his neighbors.

I grew up sheltered in a middle class suburb of Boston, both of my parents liberal leaning academics, their political and social views polar opposite to those of the imaginary Bunker household. As I progressed from elementary grades into high school, gaining a wider awareness of the world around me, it was easy to contrast my upbringing with an independent-minded, spirited mother and cerebral, mild-mannered father to Carol O’Connor’s masterful portrayal of the bigoted, misogynist, head of household, Archie Bunker and his slightly daffy wife, Edith, played with such dignity by Jean Stapleton. I can’t stress enough how foreign it was for me to watch Archie’s explosive, disparaging behavior and Edith’s cowering retreats. It shocked me to hear Archie launch into one of his rampages, but underneath it all, I comforted myself that it was just a show and he was just acting. He wasn’t a real person.

Or so I thought.

It didn’t take long once I got to high school before I experienced first hand the sting of male disrespect against women. An A-student, varsity athlete and yearbook editor, I remember how discouraging it felt to find myself struggling to pass AP Physics my senior year. When I asked for extra help from my teacher, who happened to be the head of the science department, I was summarily dismissed, but not before he explained that he didn’t give extra help to girls because we didn’t need to understand science. Yes, I promise you. That really happened.

At the small liberal arts college I attended, male dominated, co-educational Greek houses ruled the social scene. I fell headfirst into first semester rush, naive to the cunning ways of fraternity recruitment. What began as exciting flattery delivered by handsome upperclassmen, eventually devolved into harsh and degrading hazing and other abuses. I arrived on campus my freshman year thinking the world held unlimited choices. By graduation, I had completely lost my inner compass. It would take several more years before I would find solid footing again, both professionally and personally.

Stories like these showcase how my own voice was rendered silent, at different times in my life. I am thankful to have been surrounded by friends and family willing to help me overcome these hurdles and others. But my unpleasant memories resurfaced, in all their angry glory this week with the abrupt dismissal of Senator Elizabeth Warren from the Senate chambers while attempting to read the transcript of Coretta Scott King’s 1986 letter. Warren had been at the podium to thwart Congress’ approval of Senator Jefferson Sessions appointment for Attorney General. As I watched Senator Warren’s Facebook Live video, I saw a woman scorned but determined to continue reading Mrs. King’s letter in the Senate hallway.
​
Here she was, a literal and figurative outsider, fighting for a cause her constituents and she believe in, the rights of blacks and minorities to cast votes freely and without impediment. Due to today’s social media savvy culture, Warren’s determination led to a new Twitter hashtag #ShePersists that has gone viral since this event took place.

Senator Warren had been banished by an elitist male bastion, the majority of whom were simply tired of hearing her voice. Where does this leave us, we women who have worked so hard to be heard?
​
Men who buy into the rationale that it’s a woman’s “tone” of voice that matters, more than her words, are missing the point. Women have long been accused of being “shrill,” “high-pitched” or “bitchy” as we try to convey our ideas or share our opinions. All we need to do is think back to our dear, beloved, Edith Bunker. She delivered her lines with that now infamous, teeth-grating, chalkboard-scraping voice but underneath, she had a lot to say.

If only we had chosen to listen.

Inspired by Virginia Woolf’s A Room of One’s Own, Anne started Womenspaces, a blog about home, family and personal relationships. We continue that tradition here, profiling pieces written by women who have come together through Richardson Media Group.